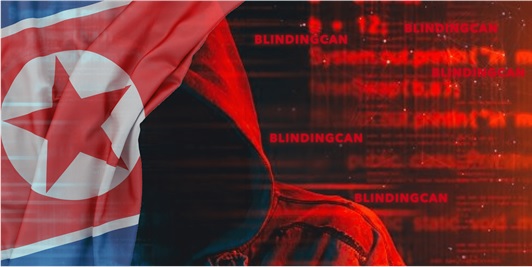 Well it’s that time again, which happens to be constant and we have more malware fun coming in from North Korea.

The article below explains the details of the BLINDINGCAN, how it gets in your environment and what you can do to protect your critical systems.

The BLINDINGCAN Remote Access Trojan leverages a .docx file which attempts to connect to external domains for a download. Then a 32-bit and a 64-bit DLL is retrieved to be installed as a 32-bit and a 64-bit DLL named “iconcache.db” respectively. The DLL “iconcache.db” unpacks and executes a variant of the Hidden Cobra RAT. The Remote Access Trojan contains built-in functions for remote operations that provide various capabilities on a victim’s system allowing for better persistence and further exploitation within an already compromised system and network.

Though this remote access trojan could be used against anyone, the threat is currently focused on military contractors who have or are working with the military or energy companies and the attacks have been done through fake job boards leveraging a malicious word document. This remote access trojan is being used to keep persistence on the already exploited/controlled systems.

Digital Immunity DI PROTECT™ intercepts at the point where untrusted code is executed to be loaded into memory. In this case, the remote access trojan has a dropper file which is packed with a UPX packer and that file in itself would be caught at execution time without disruption to the system or it’s good processes.

Digital Immunity DI PROTECT™ will detect and prevent, in memory, at run-time, the execution of foreign code such as BLINDINGCAN. Digital Immunity’s prevention capability will not disrupt good processes, ensuring that operations continue uninterrupted.  DI PROTECT™ also capture’s deep forensics, in context, at the point of attack.

TAIDOOR: Remoting in from China Since 2008
Scroll to top